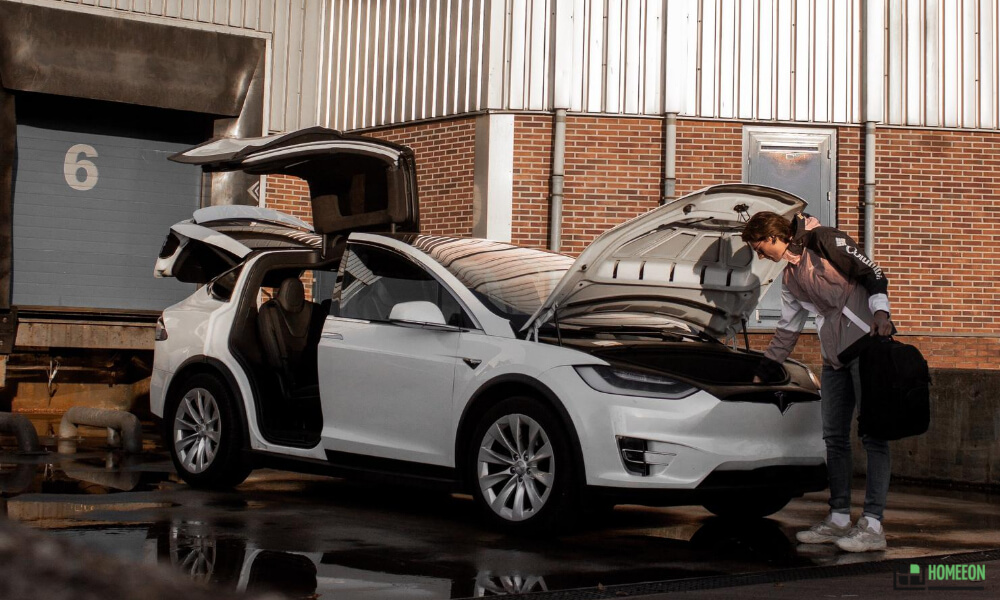 Tesla has considered that not everyone has an oversized garage for the doors opening mechanism to be rigid and unchangeable. The car itself can dictate how the doors will open. It can happen automatically, or you can manually override this feature and open the car doors. The door opening mechanism can be programmed to open a certain way when you are at different locations that you frequently visit, including your garage.

Even though the tesla model X doors look cool, they can be a little slow while opening and closing. Most users can find this to be very distracting and time-wasting. With the doors not opening up like regular cars door, you might be confused before you fully understand how to operate them.

But, with this guide, all your troubles are sorted.

How Do The Tesla Model X Doors Function?

The tesla model x doors are the most identifiable feature of the electric car. Even people who know nothing about the electric vehicle will request to see the doors opening up even before purchasing the car.

The double-hinged doors of the tesla model X are unique, and they allow you to open the doors even in tight spaces. Sliding doors on a minivan always have the upper hand in space usage but, tesla is better when compared to the standard way of opening car doors.

Below is how the tesla doors function:

2. The doors have a separate hinge in the middle that allows the lower portion of the door to articulate as it opens and closes. Sensors are embedded into the doors to prevent them from hitting cars next to them or hitting something above the vehicle, like a low roof. Hydraulic struts placed on each door work in a push and pull mechanism to control the doors as dictated by the sensors.

3. The double hinges on the door are placed at different points. One is placed at the door or body junction, while the other is installed further outboard. At these two hinges, two electric actuators help push the door open. After it opens up, the torsion springs now take up the mantle and open the doors.

How To Calibrate The Tesla Model X Doors

For this function, once you park at your preferred location, open touch controls, proceed to services, and finally calibrate doors. Press and hold the calibrate button until the car finishes calibrating the door settings. The doors open the doors app, save the settings and the location in which you are. In the future, your car will open its doors with the pre-set settings.

Like every other product, the tesla model X doors have their good and bad attributes.

Advantages Of Falcon Wing Doors On The Tesla Model X

Some of the pros include:

A large door opening means more space to operate on and with. For parents, you have enough space to stand and fasten your child’s car seat with minimal restrictions.

2. You Get A Roof To Stand Under

When the tesla model X falcon doors open up, they create a roof for you besides the car. If it is raining, you can stand there and pack in your goods as it rains.

3. They Help Reduce Damage On The Car Door Or Cars Nearby

The car doors come with sensors that detect when a vehicle or an object is near your opening doors. The sensors also automatically evade the obstacle, thus ensuring the car doors do not get damaged and cause damage to surrounding cars.

The falcon-wing doors can open when the spaces left to the sides are tight. The opening will be large enough for you to go through or move in anything you might have.

Disadvantages Of Falcon Wing Doors On The Tesla Model X

Some of the cons that come with the falcon-wing doors include:

1. They Are Relatively Slow To Open And Close

2. They Can Be Confusing

Most cars have doors that open outwards. The Tesla Model X is the first car to have a falcon-wing door that opens upwards. At first, it might be a bit confusing before you get used to it.

The doors on this car are complex and different from all the other car doors. Over time the falcon wing doors will need repair and maintenance, which might be expensive.

4. The Doors Can Limit The Usage Of The Roof Of Your Car

Most people will put carry-ons on the top of the car and tie them down when traveling or moving. With these upwards-opening car doors, you cannot tie anything that overhangs on the roof of your vehicle. Any luggage tied onto the roof may obstruct the doors from opening.

The tesla model X doors should not concern you if you have a small garage. Manufacturers at tesla have added features to the car to ensure that its doors opening mechanism is not a limiting factor in tight spaces. Sensors and springs help open and close the door evading any obstructions on the side or top of the car.