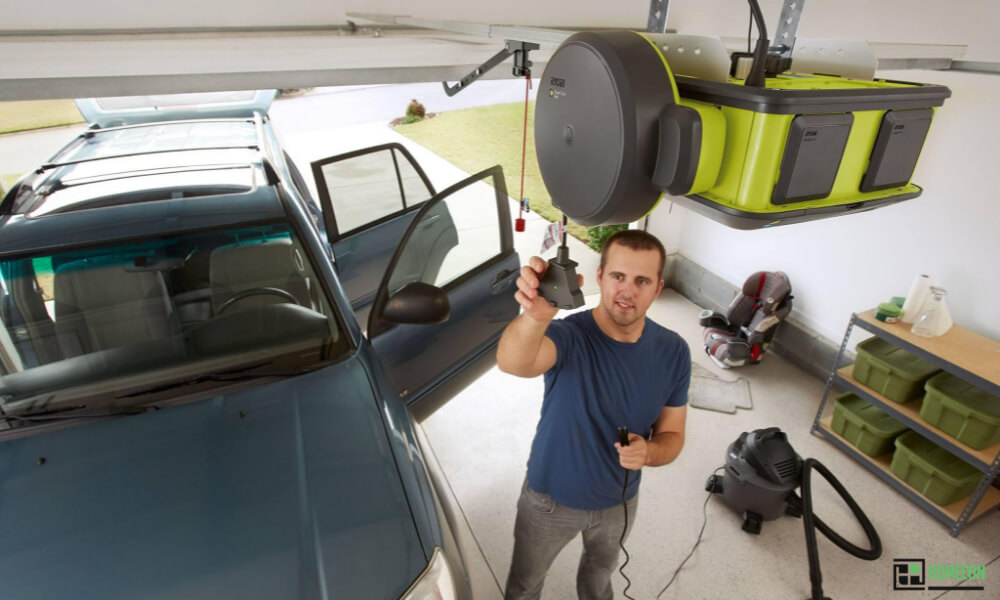 Chamberlain Group had a patent on some parts to produce the Ryobi door opener. A patent is an intellectual property that gives the producer of a product the legal right to exclude any other individual from making, using, selling, or even reproducing the specific invention for a certain period.

What Are The Rights That A Patent Offer?

A patent is given to the owner of a product (inventor) after the invention is proven to be unique.

The patent owner is given the right to decide who may or may not use the patented invention. The patent owner may seek to get a certain percentage of profits from those who use their innovation to make, sell, distribute or import it. When a company or individual produces the product without the inventor’s consent, they would be breaking the law.

Techtronic Industries Co LTD broke the law by making and selling the Ryobi door opener at home depot. Hence, the product was taken off the shelves of home depot stores after the court made its ruling.

Is A Patent Valid In Every Country In The World?

A patent can only be imposed in a specific country; they are territorial. Having a patent for your invention will only cover you in the country you are in. As evident with the Ryobi door opener, the product was taken off the shelves of home depot stores in the United States but not in other countries.

To have a patent valid in every country, you would have to apply for the patent in every region in the world.

How Are Patents Rights Enforced?

The law withholds a patent. It works to protect its holder against a malicious individual seeking to benefit from the new invention. When a third party breaks the law by infringing the patent, the court will deliver a judgment and stop the party from making, producing, or even selling the product.

Ryobi door openers were taken off home depot stores through a court order. The product was not to be sold at Home depot from the day the order was passed on 23rd May 2018 until 2023.

The main responsibilities of a patent are to:

1. Monitoring any infringers of the patent.

3. Taking action against anyone who infringes the patent.

What Is The Importance Of A Patent In Business?

A patent provides an incentive to protect inventors by recognizing them for coming up with something new that will help improve lives.

Patents are also mutually beneficial as they help spread new knowledge, which aids advanced technology and newer inventions. With knowledge of the invention readily available, the reinvention of an already existing product is reduced.

Patents give recognition to the inventor. Without a patent, the information regarding a new invention would be readily available for anyone to manipulate and act as it is their own.

However, the patent holder gets the front seat and recognition by anyone who incorporates their invention with any new products.

How To Apply For A Patent

Before you decide to apply for a patent for your invention, you must ensure that you have met certain conditions. These conditions are put in place to reduce the number of patents being handed out and reduce the workload on the courts.

Some of these conditions include:

1. Your Invention Has To Be Unique.

A unique invention must contain new characteristics that do not already exist in the products field. The existing features or knowledge of the invention is referred to as “prior art”.

2. The Invention Must Be New And Not A Replica Of An Existing Product.

For your invention to be patented, it has to show that you derived all your knowledge and expertise to make it. If proven that your innovation is similar or is based on an existing product, you will be liable for infringing the patent if the original product is patented.

3. The Invention Must Be Helpful In Its Industry.

When you invent a new product, it has to be helpful in its specific industry. It has to advance already existing products. Also, the invention needs to be functioning and not just a theory of how it will work in the future.

4. It Has To Be A “Patentable” Invention.

Every country has set its parameters on what can be patented and what cannot. If your invention does not fulfill all the set rules, it cannot be patented.

What Are The Different Types Of Patent Infringements?

Once an invention has been patented, there are various ways that the law deems as an infringement. Some include:

1. Direct Infringement. This happens when the product covered by the patent is produced without consent from the patent holder.

2. Contributory Infringement. This type of infringement happens when an entity or person supplies the product produced by an infringer. Home depot sold Ryobi door openers made by Techtronic Industries Co. LTD; this is an example of contributory infringement.

3. Induced Infringement. In this situation, the person or entity supplies the direct infringer with products to produce the patented invention.

4. Literal Infringement. This infringement occurs when there is a direct connection in writing between the patent claims and the infringing product.

What Are The Consequences Of Infringing A Patent?

When a court finds one guilty of patent infringement, there are several consequences the infringer will face.

Some of this includes:

1. Payment of damages or royalties to the patent owner.

2. The court can order a permanent injunction of the product.

Techtronic Industries Co. LTD produced the Ryobi door openers; this was an infringement of the Chamberlain Group’s patent.  Infringing a patent on an invention is a liable offense; it led to a court case where the patent holder won. Home depot was the store supplying the Ryobi door openers. After the courts made a permanent injunction order, the product had to be taken off the shelves at home depot.