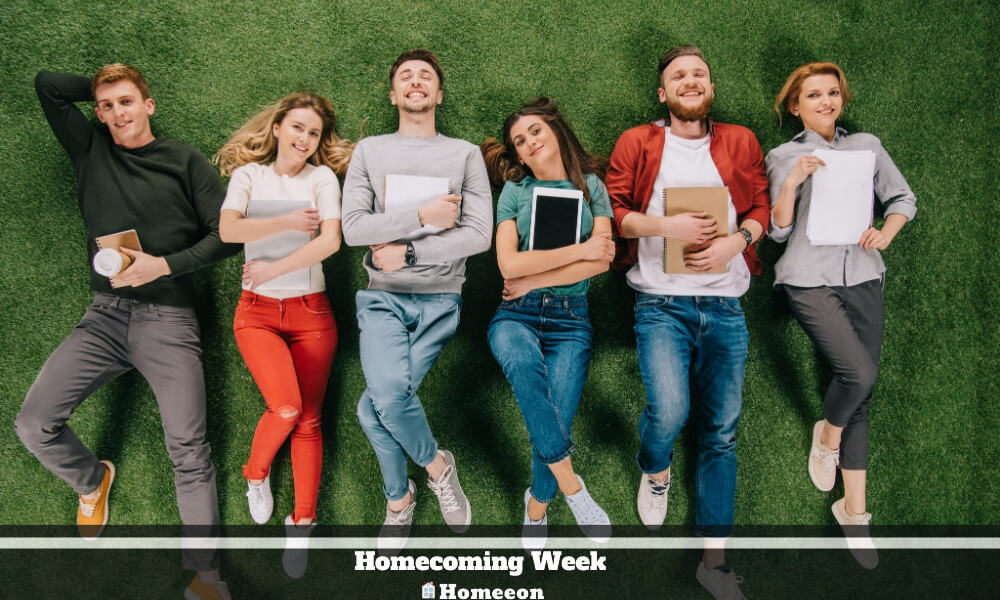 Homecoming week is an annual event in the united states colleges, high schools, sometimes churches whereby they celebrate these organizations’ existence. The event is referred to as homecoming week because the alumni come back with a sense of reflecting on the tailor-made values and cultures of the given schools and universities.

During the homecoming week, former students are welcomed back to the school through football games, hockey, and a dance.

However, in smaller schools without football games, a simple banquet is organized whereby the alumni meet and celebrate their former school’s achievements. Individual achievements in an event referred to as a closed or consolidated homecoming. This provides special recognition to the alumni.

Homecoming originates from the 19th century from four schools claiming its origin. These schools include; Baylor, southwestern, Missouri, and Illinois. However, the University of Missouri has received most of the credit on its origin. The event was first held after that, an intense rivalry football game was held there, and afterward, they invited alumnus of the university to celebrate their win. The event was attended by about 10,000 alumni, which involved activities such as a rally parade and a bonfire.

This was later transformed into an annual event in the university, and other activities started emerging. Southwestern University and Baylor universities engaged in the same thing with however different activities, which included reunion parties, a parade, and in the afternoon, there would be a football game, which continued to be the case until they celebrated their 100th anniversary. The University of Illinois celebrated its annual homecoming event from 1910 until 2010 with only one year of the exemption, 1918, as an influenza pandemic outbreak.

Who Attends The Homecoming Week?

In the united stated states, homecoming week attendance is open for everyone. This includes both the school’s juniors and seniors, the alumni, organization partners, and the local community. In other cases, some public service providers such as the firefighter’s department. However, in Canada, it is highly dependent on the rules and regulations of an institution as some institutions will not accept students from other schools attending together. Some high schools and colleges allow their students to take students from other schools to the homecoming week as their partners.

Activities Involved During The Homecoming Week

Selection of the homecoming king and queen (homecoming court): refers to a group of students selected to represent the school. In a single-sex school, a king and a prince or a queen and a princess are selected. However, some single-sex schools prefer to hold a joint homecoming week event. Each provides a representative that is a king from the male school and a queen from the female school, mostly those from the graduating class. When selecting the homecoming court, factors such as their contribution to the school through academic and non-academic activities are considered. There is a difference in how different schools select their homecoming court. Some of these differences include:

1. Some schools will select a court representative from each class who will compete later with courts from other classes

2. Other schools will select either just a homecoming king or queen who is then allowed to either select their prince or princess and in other cases, they choose their escort team.

3. Other schools will choose their homecoming court, and the topmost runners up as voted for by the other students are allowed to fill out the court

A homecoming parade involves the school band marching with floats created by every class in the school, the homecoming court as they ride together. At times, the parade may involve businesses and other organizations that have partnered with their schools and some public service departments, such as the fire department.

Dress-up days: Students are allowed to dress-up in a suitable way to the homecoming’s stated theme during the week. For example, a nerd day student is expected to dree-up as nerds, cowboy day, and pirate day.

Pep rally; is one of the most anticipated days during the homecoming week. This is because apart from the many activities involved, such as games and skits performed, the homecoming court is introduced to the school, and in most cases, their coronation is done. Later in the day, to mark the end of the day, a bonfire in which they used old wood structures from the rival schools is burned in a controlled fire.

The homecoming dance: this is usually the climax event of the homecoming week and is anticipated by many students. The event usually happens in school or off the school grounds, with the venues well decorated with music playing. The homecoming court is the first to dance to open the dance floor to the rest. In most cases, after the homecoming week, some schools celebrate the end of a homecoming week through a game such as a football and refer to the event as court warming, which marks the beginning of the new homecoming king and queen.

Difference Between Homecoming Week And Prom

1. The homecoming week occurs during the first weeks after the school reopens and therefore acts as a welcome back to the school, mostly in September and October, whereas prom takes place at the end of a school year, marking the end of spring.

2. Homecoming is heavily attended as it involves all students, the community, and the organization’s alumni, whereas prom, in most schools, only involves the seniors and, in rare cases, the juniors.

3. Homecoming is more casual as, in most cases, the event involves more casual dress codes for the homecoming dances such as short dresses, jean shorts, and a top. In contrast, the prom event is mostly carried out off school grounds with a more formal dress code such as gowns and tuxes.

4. Homecoming individual preparations are less costly, and invitations are open to anyone, which is the opposite of prom. Participants are required to buy tickets to participate hence locking out many people.

5. Homecoming, being a huge event, is mostly organized by student organizations such as sororities and fraternities. The prom is smaller and involves fewer people in attendance; hence it is organized by a few students.

Importance Of The Homecoming Week

2. Homecoming acts as a bridge between different classes of people. This is because the alumni are allowed to attend the event. During the interactions with the current students, they can identify things they did wrong and may offer their advice where necessary. It allows them to do things they did not do back then for the current students. They can learn from the alumni based on their personal experiences.

3. It provides an opportunity to network. As homecoming involves more than one organization and school, people can meet and interact, and through these connections, some people can get job opportunities and internships.

4. It also provides an opportunity to show support to the community surrounding the institution. For example, this is through special recognition of the purpose of the local community; for instance, some schools’ homecoming week involves charity works whereby they visit the less fortunate in society. Also, some public service providers are recognized, such as the firefighters’ departments, who are in most cases involved during the homecoming week parade.

5. Homecoming week also provides the students with a platform to know each other, their strengths and weaknesses, talents, and abilities, and showcase them. This is important as they can make new friends who may have similar interests. Some students even end up being recruited in the school’s team after the homecoming week after their talents were recognized

6. As for the local community, the homecoming week provides them with an opportunity to showcase themselves to be recognized through participation. For example, restaurant owners may offer to provide food services to the hosting school, while hotels offer guests hospitality services.

In conclusion, a homecoming week is a week-lasting event that takes place in colleges and universities in the united states with the primary purpose of bringing people together in remembrance of an organization, mostly a school where all partners involved meet and celebrate and reunite. Homecoming week should be maintained to empower the local community and strengthen the relationship between the alumni and the institutions and support the bridge between the institution’s different classes and ages.