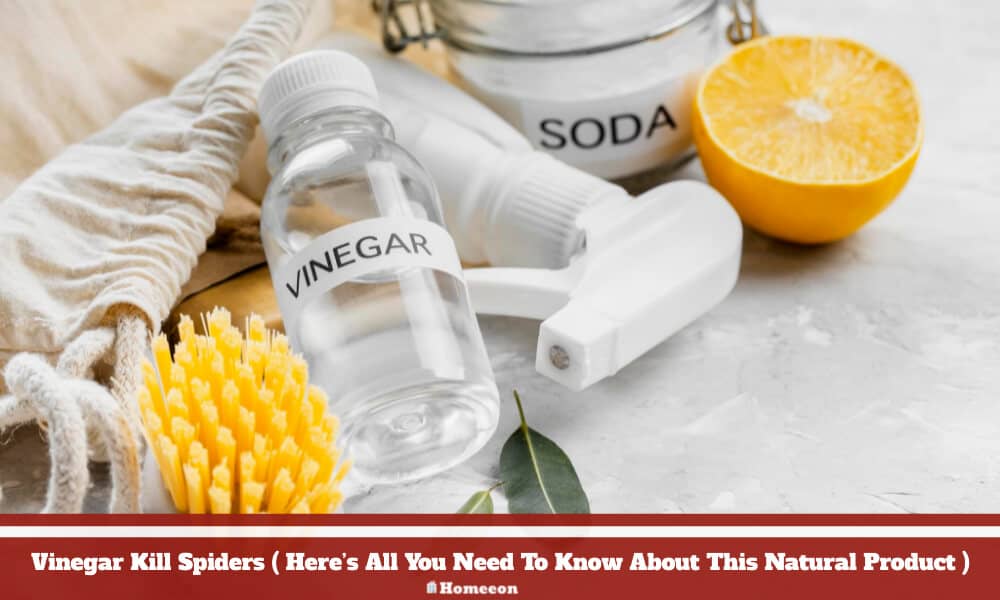 Yes. Vinegar will kill spiders since it contains acetic acid that is harmful to these creatures.  But, how fast it works depends on the amount of acid in it. Different types of vinegar have varying degrees of acetic acid, with white vinegar having the highest percentage.

Common Types Of Vinegar And Their Source

How To Use White Vinegar To Get Rid Of Spiders

White vinegar is one of the most effective types since it has the highest level of acetic acid. This product substantially eliminates the spiders, not by its pungent smell, but the acid harms and kills the creatures without hurting your kids and pets. The following steps are helpful;

2. Mix water and vinegar in the ratio 1:1 (one volume of water and one volume vinegar) in a spray bottle

3. Spray the solution in the cabinets, corners, closets, or directly on the spiders. It would help if you sprayed all crevices and cracks on your floors and walls to tackle any spiders that could be hiding in these places.

4. Repeat the process regularly or as need be or anytime you see a spider.

You can add some orange peels to the mixture to neutralize the smell if you cannot stand it. Leave the mix for a day to allow the scent of citrus to infuse properly before spraying.

Spiders are sensitive to the sour taste and strong scent of vinegar. If you spray a solution of 50% vinegar and 50% water in cracks and crevices of your shed and house using a spray bottle, you are sure to keep these eight-legged creatures at bay. Be sure to spay all entry points and places where you regularly see the spiders.

You can soak some orange peels in a cup of vinegar and leave it overnight before spraying if you dislike the smell.

How Much Vinegar Is Required To Get Rid Of Spiders?

The amount of vinegar required to kill spiders depends on the type since they have different amounts of acetic acid. Since distilled white vinegar has more acetic acid than other types, you require only a small amount to eliminate the spider menace. Mixing about 125ml of white vinegar with 65ml of water and spraying on the spider is enough to kill them since the acetic acid will burn them to death.

Mixing white vinegar with water makes it easy to spray and get to the hard-to-reach areas where spiders can hide. You can also use the vinegar to clean surfaces and floors as doing this will also help deter the creatures.

How Often Can You Spray Vinegar To Deter Spiders?

How often you need to spray vinegar to get rid of spiders also depends on its type. For white distilled vinegar, you can apply it after every fortnight, but apple cider vinegar can be sprayed weekly. Ensure that you get to the spider’s hiding place every time to get rid of them fast.

Apple cider vinegar has a harsh smell that makes it effective in repelling and killing spiders. For an effective outcome, you can soak some cotton balls in this liquid and place them in strategic places to repel the spiders. Since spiders dislike the strong scent of apple cider vinegar, putting the cotton-soaked balls in the house will keep them off for a more extended period.

Besides using vinegar, ensure that there are no cobwebs or anything that attracts spiders to the house.

Like the spiders themselves, not all types of vinegar will destroy the eggs when they get into contact with them. A spider’s egg sac is made of silk that can dissolve in vinegar and get killed. But, some egg sacs have thick silk that may not be easy to destroy.

Some egg sacs that are not thick will die when vinegar is sprayed closely, but some will require 100% concentrated white vinegar. A weak vinegar has a low acetic acid concentration that may not affect the naturally slippery silk of the spider egg.

Which Vinegar Types Will Not Kill Spiders?

Some vinegar types have a low concentration of acetic acid, and using them on spiders may not affect them. Such kinds include;

This vinegar has a slight concentration of acetic acid and therefore ineffective in killing spiders. Mixing it with water will also make it too dilute to even repel these creatures, and it is better not to waste it.

White wine vinegar is another type of vinegar that is better left in the kitchen. The product has high flavor content and minimal acetic acid levels, which makes it ineffective in killing or even repelling spiders.

Sherry vinegar may also not be a good choice when it comes to dealing with spiders. This type of vinegar has a low acid level and may require large volumes to be effective, making it quite expensive and not worth it.

While malt vinegar may repel spiders to a certain extent, it is not as efficient as white vinegar. Since it is made from barley and not distilled, it has little acetic acid, which makes it not a good choice.

It is worth noting that even the effective types of vinegar may not work outdoors since they evaporate fast, especially when it is windy. It is also advisable not to use vinegar to remove spiders in your bedroom. Spraying this product at night in the bedroom may cause you to be irritated in your nose due to its strong smell.

How To Prevent A Re-Infestation Of Spiders?

After eliminating the spiders, it is necessary to take the essential preventive measures to avoid a re-infestation. The following methods will be helpful;

Spiders feed on ants and other insects, and one of the best ways to keep them at bay is to deny them food. It would help if you also dealt with their hiding places so that they won’t come back. Spraying an effective insecticide kills both the spiders and their prey, which helps prevent a comeback.

Cobwebs will attract new spiders to come back even after you deal with the current infestation. It is necessary to make sure that you remove them from inside and outside your house, as doing this may deny them an access route. You can also spray an insecticide in the areas where the webs were.

Spiders can hide in cluttered rooms that are not frequently used. Decluttering these areas help to destroy the spiders’ hiding places hence preventing them from coming back. Be sure to maintain a clutter-free attic, garage, and basement, as this will help prevent even other pests from invading your home.

Block all entry points by sealing off or caulking crevices and cracks around your property. Embrace an Integrated Pest Management (IPM) program throughout the year to ensure that no pests will invade your home.

Use A Natural Method.

Mix equal parts vinegar and equal parts water and spray regularly in places where spiders were active. The pungent smell of vinegar will deter spiders from coming back.

Are All Spiders Poisonous?

Out of the many spiders in North America (more than 3000), only about ten are poisonous, with just three species causing fatalities. Spiders will rarely bite, and when they do, it is usually for their defense. Only less than six people succumb to spider bites yearly.

The following are some of the deadliest spiders and how to identify them:

Vinegar is a natural substance that is effective in keeping spiders away from your home. Other than its strong scent that these eight-legged creatures dislike, it contains acetic acid harmful to spiders. White vinegar is the most preferred of all types of vinegar since it has the highest concentration of acid. To make it more effective, mix equal portions of this vinegar and water, put the mixture in a spray bottle, and apply in all areas where you see spiders.

Applying the liquid directly to the spiders is also efficient if you want to kill the creatures.