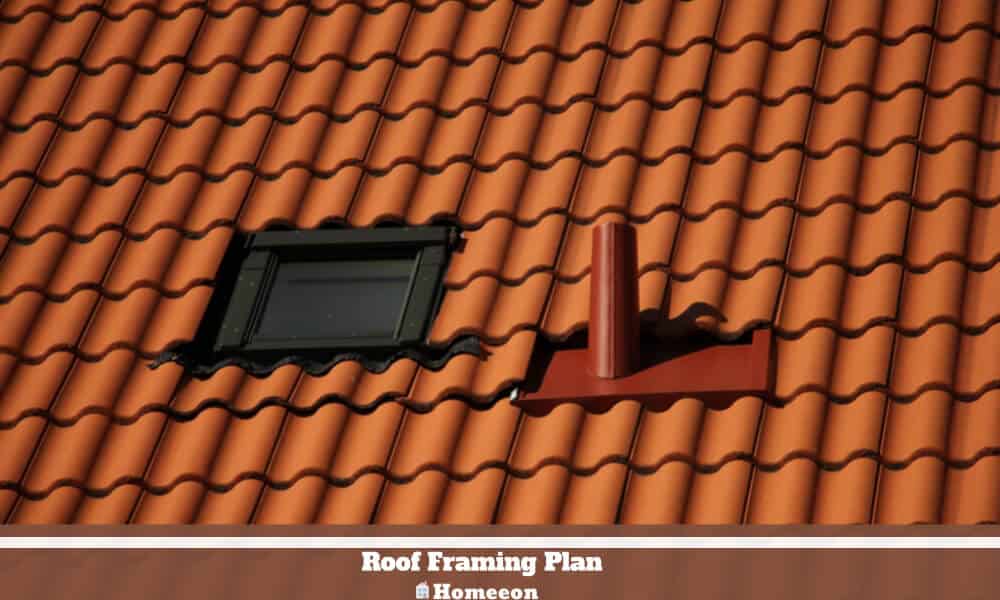 A roof framing plan is usually a 2D view of information in a set of techniques. It represents framing parts used to create a roof and ceiling of a house. This plan mainly contains detailed reports describing the sizes and types of materials of the framing parts and includes their reinforcing brackets and straps. A roof framing plan also has the outline of the superimposed framing.

Why Is A Roof Framing Plan Important?

A roof framing plan carries with it the structure of a roof and all its components. It would be best if you did the roof framing following the roof framing plan, or else it will fail the framing inspection. It has all the details of what will cover the roof and the ceiling. This plan is essential as it has all the construction notes, which must be adhered to and serve as a reference point. Most of the details on the notes provide information of materials to be used on the roof, nailing and screw patterns to be used, method of roof installation, underlayment, and flashings, among others.

A roof framing plan includes all dimensions, sizes, and angles of materials used in roof framing, including roof design, shape, size, and material. Having a laid-out plan before roof framing is crucial as it helps the constructor prepare both physically and mentally, making the framing process easier. It also helps to assemble all the required tools and materials with some work done before the actual framing begins. Having a ready roof framing plan leaves you with only the placing work, which is not as tricky, especially with manual laborers to help with some of the physical work.

Who Uses The Roof Framing Plan?

The contractors mostly use the roof framing plan, but you can ask them any questions about the roof framing work as the project owner. It helps you understand the roof framework better and make changes where necessary. Sometimes, local officials require a roof framing plan and roof plan to get permission for project completions. In such a case, coming up with one is very important to prevent delays in completing the project associated with the local authorities.

What Should You Know When Making A Roof Framing Plan?

In most cases, a roof framing plan depends on the type and style of roof used in a house. There are different roof types, and their roof frame plan and construction differ. Rooftops add attractiveness to a home, and the style used brings out a different effect. Some are more sloping than others, with varying levels of challenges during their construction. The following are some of the roof styles considered before coming up with a framing plan;

A hip roof is a style that slopes on both sides and ends of the building. These slopes result in an even overhang around the house, creating a low appearance. Such roofing styles require low levels of maintenance since there are no sidings above the overhang parts. The hip roof style is solid and should be used in areas that experience severe storms.

This style is also known as the flat roof, even though it is not perfectly balanced. The rafters used on flat roofs laid to a slight angle are for water draining purposes only. You should apply the ceiling materials on the rafters’ underside Since it is difficult to maintain a moisture-free flat roof. Sheathing and roofing, on the other hand, spread on top of the rafters. Such roof types are better if used in dry climates.

It is also known as a lean-to roof as it slopes only in one direction. You use it as a secondary roof by adding it to an existing one. Sometimes, you can attach it to the sides of the building structure or the existing roof.

The gambrel style is a variation of the gable roof style having steep slopes on two sides. This technique involves a second slope beginning partway up and continuing to the topmost part of the building. Such roofing styles are common in barns as they leave more attic space and can serve as a second floor which is not the case with gable and hip roof styles.

This roof style is a variation of the hip roof style with steep slopes on all its four sides. On the way up, a second shallow slope is developed and goes all the way to the top, where it meets slopes from the other three sides. Mansard roof style was introduced to the North Americans by the French who settled in Quebec, Canada.

This pattern combines both the gable and hip roof styles. It is a hip roof style with small gable styles on each end near the topmost parts of the roof. The style has an even overhang around the structure which protects the building walls from rain.

What Are The Standard Terms Used In A Roof Framing Plan?

Some terms used in a roofing plan are primarily parts of the roof. Mastering such terms makes it easier to understand roof framing concepts. Some of the words include;

It is an inclined part of the roof framework serving the same purpose as joists in the roof. You lay the rafters 16-24 inches apart. Their difference depends on their length, spacing distance, slope, and the type of roof style to be used. There are various types of rafters, depending on the type of roof style.

It is a horizontal tie connecting opposite pairs of rafters whose purpose is to stiffen the roof.

A ridge board is a horizontal piece connecting the upper parts of rafters giving a house its full-length extension.

Common rafters stretch from the top plate to the ridge board at a 90 degrees’ angle.

These rafters extend diagonally from a corner formed by two top plates to the ridge board. They are used in hip roof style.

How Do You Layout A Roof Framing Plan?

Gable roof style has the most straightforward framing plan compared to other roof styles. It involves the following;

1. Begin by laying out the outline of the structure. You can label it as (A)

2. Determine the direction the rafters will run

3. Draw a centerline at 90 degrees’ angle(B) with the direction which will determine the location of the ridgeline(C)

4. Decide on the distance between the rafters(D).

Hips used in the hip roof style extend from each other at an angle of 45 degrees, but others angles are possible. A 450 angle ensures a uniform slope for all the roof surfaces, which is not the case with different angles. Laying a roof framing plan for a hip roof style involves;

1. Begin by laying out the outline of the building(A)

3. From each corner to the centerline, draw lines at 45 degrees(C) to establish the location of the hip rafters.

4. At the intersecting points of the hip rafters, draw the ridgeline and label it (D)

Depending on the building size, determine the gap between raters and lay them out on the roof framing plan.

The roof frame planning process is the same as all the other roof styles with slight differences, such as on the rafters’ angle of inclination. However, some such as hip and valley roof style can be complex as they involve more than one hip roof intersecting at 900 pitches.

A roof framing plan is a necessity when roofing any building. It contains essential information such as the type of roof to be used and the materials. It also lays out the measurements, dimensions, and sizes of the framing requirements, including the angles involved. It helps both the contractor and the project owner prepare all the important tools and materials for the roof framing work.