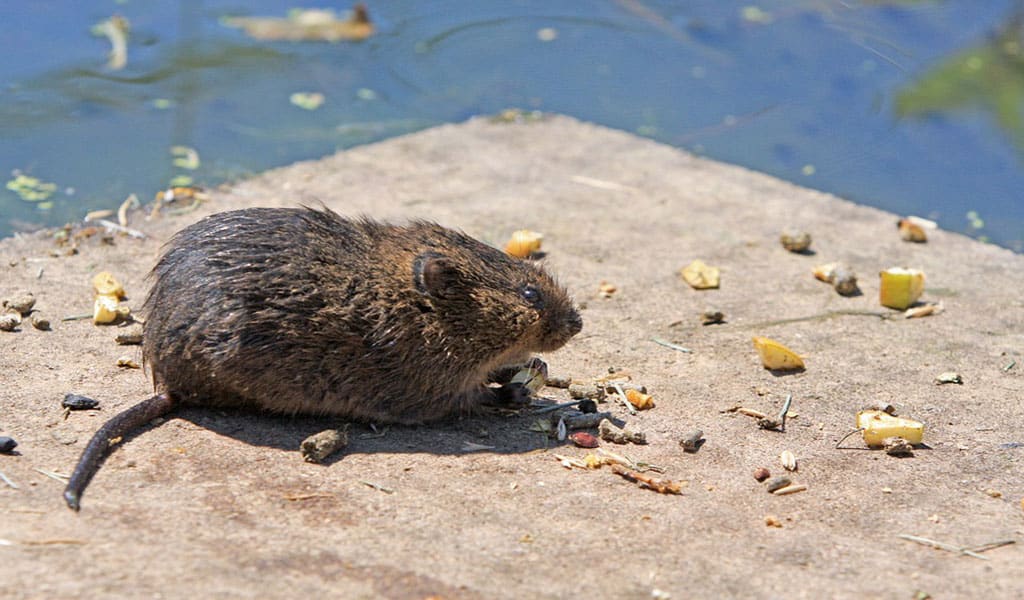 If your house is near the field or you work in a factory, it is very easy for voles to enter your facilities and take over them.

Therefore, in this article, we will analyze step by step how to get rid of voles through different methods.

Nobody wants to have vole at home since they are a serious danger to people’s health due to all the diseases they transmit.

Many get along with a good domestic cat that hunts them and does not allow them to enter, but if you do not have that luck they can become the protagonists of a plague.

How to get rid of Voles

Voles usually live in nests and burrows in areas that are at ground level or basements. These small animals look for places where they have easy access to food, water, a good temperature, and where they can move safely.

The kitchen or bathrooms are two areas of the house where voles are most commonly accumulated, although the garden is another of the key spaces for them.

There are some signs that can make you think you have voles at home:

How to avoid having voles at home

In order not to have to kill voles, scare them away or spread a killer through your house, it is recommended that a series of cleaning actions be carried out that will prevent a rodent plague in your home.

It is essential to keep the house always clean and with minimum hygiene. Voles usually enter the houses looking for food so it is highly recommended not to leave food on the table or furniture.

In the same way, it is very important that the garbage can is always closed and thrown away daily.

Checking the walls and checking for cracks or holes in the walls is very useful.We recommend that you do a good inspection and cover with plaster or putty all the recesses where they can sneak in.

If you have pets at home it is important that the feed bags and different foods for them are tightly closed and placed in high places and not accessible to voles.

If the house has a garden area, it is important that you do not leave thickets or neglected plants or stacked woods between which rats can easily nest.

Before the kill: how to scare them away?

some of the methods you can follow to scare the mice before they enter your house are:

It is an aroma that voles do not like. The idea is to mix water with a mint extract and spray it through different areas of the house that you think you can access, such as the doors closest to the street.

Another of the aromas that rodents do not like. The mixture we propose is based on a couple of tablespoons of tabasco, a cup of water, and half a cup of detergent. This liquid should be applied to the walls and hallways of the house.

Cloves, cayenne pepper, and cinnamon are other natural scents that are used to scare away house voles. The good thing about these products is that they do not kill rats and are more natural than other products.

If you spray the mixture of ammonia and water in the corners, the rats can interpret that there is a much larger animal and they do not approach. The problem with this liquid is that it is very strong for both people and plants.

Another aroma that rats do not like, although less effective than the previous ones, However, it is easier to find and use. Placing a sliced ​​onion in the entrances of a rat’s nest.

How to eliminate voles?

Rodenticides are the strongest products to kill rats in a house as quickly and efficiently. The raticide is made from a cereal that can enchant rats, thus giving a hook look like a trap.

The pesticides should be placed in small quantities since the voles consume only 10% of their total weight on a daily basis.

Thus, it will be much easier for the rat to bite in the bait of the slayer if it is something tiny and appetizing for them.

These animals will not eat a portion of food again if they do not like it, even if they are really hungry.

Killings usually take about six or seven days to take effect. The reason is that, if the rat dies directly when ingesting the bait, the rest of the rats can identify the killer as the reason for death.

However, if you have never used raticides at home and you do not know how to safely end the pest, it is advisable to go to a cleaning company that specializes in pest control as it will be the easiest and most effective method.

It is important to know how to choose the type of raticide that is going to be used since rats usually identify smells and flavors very well.

One of the first tips that are given when teaching how to use rodenticides at home is to place them with gloves, so as to avoid impregnation with human odor and this causes the rats not to approach.

On the other hand, we must not forget that the killings carry poison and can also be harmful to our health.

If we use our hands covered, we will prevent our skin from absorbing these harmful substances. In any case, we should always wash our hands well afterward.

How to make a homemade booger

Making a booger with natural products is not complicated For example; one of the most popular recipes on the internet to fight rats is based on a cup of white sugar, a cup of flour, and a cup of baking soda.

These three ingredients should be mixed and placed in corners and recesses that you have at home.

This mixture will be explosive for voles, but it takes time for it to take effect, about two months, so if you want to kill rats immediately it is not the best option.