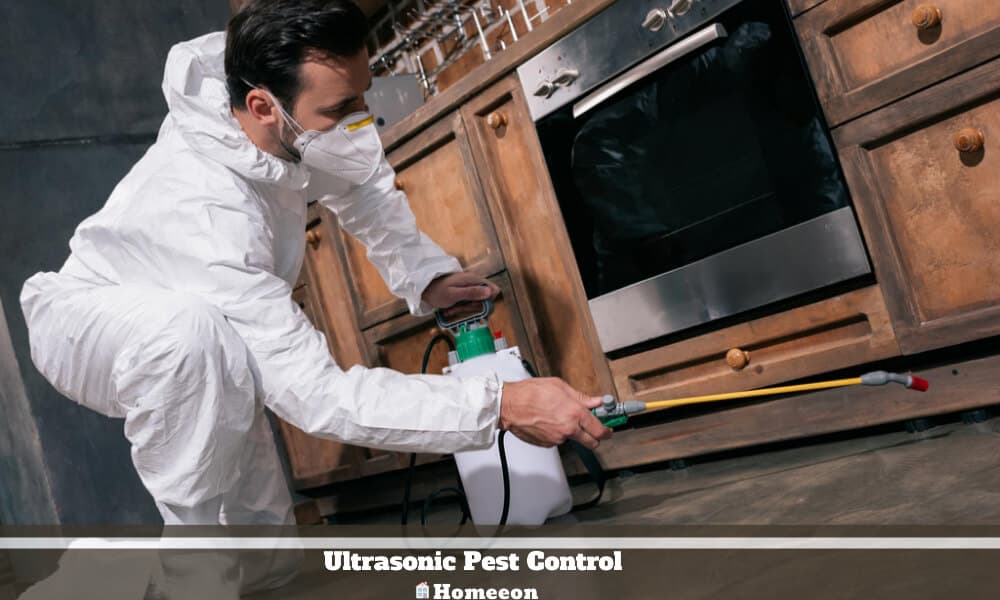 Some studies on the effect of ultrasonic pest control on roaches showed little impact on them. However, its effect on roaches is short-lived since they become habituated to realizing that ultrasonic sound is harmless after some time. They also tend to change routes when they hear the ultrasonic sound to ensure walls and furniture block its waves.

Why Are Ultrasonic Repellers Not Effective On Cockroaches?

Sometimes ultrasonic pest repellers fail to work on cockroaches since their waves are easily blocked and distracted by objects such as furniture and walls. For this reason, they fail to reach roaches that are hiding in wall cracks and crevices. Their short-range frequencies make them disrupted by objects and are therefore only effective for short and straight distances.

Additionally, roaches tend to scare away from the ultrasonic for only a few first days. After some time, they get used to the sound to the extent of not getting startled anymore. Provided there is a conducive environment for their survival, roaches will continue roaming around your house despite the presence of the ultrasonic repeller.

What Are The Indications Of A Roach Infestation?

Finding out whether your house is infested with roaches is not much hustle as they don’t hide that much. Despite being nocturnal, they leave traces of their presence everywhere. Some signs that indicate the presence of roaches in your home include;

Complaints Of Roaches From Your Next-Door Neighbors

If people living next door are complaining of roaches’ problem, there is a strong likelihood that they are also in your home. If not, then there is a risk that they are almost developing an infestation in your home. However, one can avoid an infestation by ensuring there are no open trash cans and food crumbs within the house. Cleaning up messes promptly and using sealed garbage cans is a sure way to keep them at bay.

For instance, the most common cockroach, known as the German cockroach, leaves small pepper-like specks. Other species have their droppings in large sizes, which can be as big as rice grains. Roaches do not just leave their droppings anywhere they go, but if you are keen enough in specific areas such as comers, cabinet tops, and under cabinets and refrigerators, they are visible.

They tend to have a long hollow and light brown casing that holds over 30 eggs. Once the eggs hatch, the casing is left there, especially in areas near leaking pipes or near food cabinets. In case you spot such an incident, you should immediately start to take steps towards controlling them. Continuous breeding could develop into an infestation which is likely to go out of hand. If the egg casing still contains unhatched eggs, you should flush them down the toilet to prevent them from hatching in your home.

However, it is not easy to eradicate their eggs in the German cockroaches since a roach mother carries her egg casing until they are all about to hatch.

Presence Of A Musky Odor

A single roach is not enough to leave behind an unpleasant smell, but few roaches will. They produce an intense smell around the house. Even though the smell is associated with live cockroaches, dead once contributes to the musty odor due to decomposition.

If you notice a single cockroach roaming around the house, it is a sign that there are more. The reason being, cockroaches are not loners and usually appear in large numbers. They are also nocturnal, meaning you are likely to see only a few of them during the day, but later at night, they come out in large numbers. Spotting one during the day is usually due to overcrowding, forcing it out to the open, meaning that there are more of them than you can imagine.

What Do You Do If There Are Roaches Present In The House?

Upon finding out about roaches’ presence, there are things you should do. They include ensuring that no more roaches get in, eradicate the ones you see and the ones you don’t. Achieving this includes the following:

1. To kill the roaches on sight, you can use sprays such as Ortho Home Defense, eliminating them and sanitizing surfaces. It helps in killing germs that may have been left behind from their droppings and other excretions.

2. To eliminate roaches that are not on sight, you can use baits as a control strategy since they are nocturnal. You could use Ortho Home Defense Roach Bait, a combination of food, water, and an insecticide manufactured ton lure roaches scavenging for food. In this method, the cockroaches transfer the bait food to other roaches in hiding.

3. To prevent other roaches from making their way into the house, you should ensure doors and windows, among other entry points, are treated with a fast-acting and non-staining fume-free insecticide. Doing so will keep the roach-controlling process going for both the non-porous and indoor surfaces.

What Other Repellers Can You Use On Roaches Other Than The Ultrasonic Repeller?

Cockroaches are considered the most challenging pests to eliminate from a home. Most species have a strongly built immunity to most insecticides with an additional benefit of their shells, allowing them to withstand most extermination methods. Despite their toughness and resilience, it is not impossible to eliminate them. The following are some of the most effective roaches repellents in the market:

It is considered among the best insecticide sprays for several reasons. First, the spray is effective on roaches and other household pests such as bugs, spiders, ants, mites, and more. It is also natural as 100% of the ingredients are organic. On top of it all, it kills pests quickly without affecting pets and family members, meaning it is safe. It is the most suitable for use in a household with children as there are no concerns about dangerous or toxic chemicals, which is the case in most insecticides.

It is another alternative that is cleaner and more effective than the normal mouse traps. These poach come with twelve small boxes(pockets) containing some of the items that cockroaches dislike, such as cinnamon, cedar, peppermint, rosemary, among others. It is a traditional way of creating barriers around your home that are pet-friendly.

They contain non-toxic and organic ingredients and essential oils, making them entirely safe to all household members. Each pouch could last for about six to twelve months; hence they are cost-effective. Their main advantage is that they do not require you to spray tonnes of chemicals in the house as they are safe for use indoors. They also have a sweet scent due to the organic ingredients used, such as peppermint.

It is a popular insect killer with an excellent reputation for outdoor pest control. It is mostly used as a preventative pest control method against cockroaches around the perimeters of a home. This insect killer repels cockroaches when sprayed. However, it is not eco-friendly and is unsafe for indoor use. Thus, you will need another cockroach repellant inside the house, making it an expensive option, especially if the infestation is inside your house.

What Attracts Roaches Despite A Home Being Clean?

There are different species of cockroaches, and depending on what they need, they will find their way into your home. Roaches are known to feed on anything you can think of with perfect hiding techniques. They are also very versatile, with high fine tuned senses of finding water. With such adaptations, they can survive in any environmental condition they find themselves in. You should be cautious as they pose health threats to humans and carry diseases. They also tend to trigger allergies and asthma in some people. The following are some of the things that attract roaches into your home despite thorough and spotless cleaning;

Some areas have more favorable weather conditions suitable for roaches breeding and surviving than others. For instance, the southeastern United States, such as Georgia, Alabama, and Florida, are more prone to American cockroaches. People living in these areas should expect to see them in their houses despite regular cleaning. Unlike German cockroaches, American cockroaches are not associated with dirt and unclean conditions.

Cockroaches enter your home in search of three basic things; food, shelter, and water. For this reason, they will use even the tiniest opening as long as they gain access to your home. Additionally, they have a strong sense of food and water. Therefore, you should be on the lookout for small openings such as cracks, dry vents, and the gaps between walls and floors that they can use as entry points.

Cockroaches highly depend on moisture for their survival, and searching for such a condition could take them to the cleanest homes. Such conditions are found in leaking water pipes and faucets. They even tend to hide under refrigerators and cabinets and sneak out at night to drink from pet bowls if left out overnight.

Cockroaches will eat just about anything edible for them. They can feed on newspapers, cardboard, wallpaper paste, grease, leather soap, and even hair. Since you cannot eliminate everything edible for them, it should be reason enough to expect them in your home despite all the cleaning efforts.

Ultrasonic pest repellers are electronic plugs used to repel pests. However, they are known to be ineffective in some pests, especially those which hide under furniture and house corners, such as cockroaches. Even if they affect some pests, such as roaches, it is usually for a short time until they get used to the ultrasonic sound, and it becomes non-effective to them. The reason being most pests are already aware of the sound that poses them no harm.