Potato bug refers to two different insects, namely, the Colorado potato beetle and Jerusalem cricket. Their scientific names are Leptinotarsa decemlineata and Stenopelmatus fuscus, respectively. Jerusalem cricket is a wingless insect while the Colorado beetle is an insect pest of the Solanaceae or nightshade family of flowering plants. Both types of bugs are distinguished by their diet, appearance, distribution, and pest management.

These insects feed on different crops, including several parts of potato plants such as roots, leaves, and tubers. It is from this diet that the insects get the name potato bugs.

Where They Are Found

Jerusalem crickets are mostly found in the Western and South Western USA. They are also found in some parts of Mexico but never in Jerusalem, as their name would suggest. This bug is a nocturnal creature that lives below the surface of your soil. The pest measures about 2.5 inches and looks strange with a large head for its body.

The insects dig into the ground using their thick limbs. Their legs are yellow and red while the midsections have brown and black stripes.

Colorado potato beetles are found in different parts of the world, such as Alaska, Mainland USA, Europe, Hawaii, and Asia. These insects are found in all states, and they are significant pests for both commercial agriculture and home gardeners.

The Colorado potato beetle measures roughly 3/8-inch and has the round shape of a beetle. They are orange in color with white and black stripes. These insects can fly and pose an infestation risk if they appear in swam.

Potato bugs eat the stems and leaves of a potato plant, and if they are many, they can completely defoliate your plants. Potato plants can tolerate infestations in the early season, but if the problem occurs when tubers are growing actively, it becomes severe.

Jerusalem crickets become a threat when in swarms and can be removed using various methods if they are few. You can remove woodpiles and old pots from your fields that act as hiding spots. Beetles require more effort to eliminate as they hatch in large numbers and cause more damage.

Are Potato Bugs Harmful To Humans?

Beetles are entirely harmless to humans, and their threat is only towards your plants.

How To Protect Your Crops From Potato Bugs

Colorado potato beetles are the greatest threat to your crops since each female can lay up to 25-eggs at once. Once the eggs hatch, the larvae feed on your plants and eventually destroy them. Preventing a potato bug infestation is more comfortable than getting rid of them once they invade. 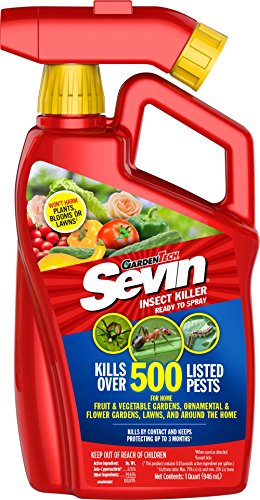 Sevin GardenTech is a ready to spray insect killer that is used for the control of a large variety of insects that can be found in the home garden. It is made up of a synthetic pyrethroid that kills insects on contact and is a water insoluble residual.

It has a short residual life, which means that it will not remain in the soil for an extended period of time and will not have a negative impact on the environment.

Try these methods to eliminate beetles from your field;

Do not plant your potatoes in the same spot every year, as doing this will give beetles access to your plants. The creatures will conveniently find a mate, pick a plant, lay eggs, and continue with this cycle.

Some plants can deter beetles if you plant them alongside or interplant with your potatoes. These plants include sage, tansy, and catnip but be careful when growing since tansy and catnip can spread quickly.

Be sure to put them under control by uprooting any unwanted young plants or not allowing them to seed.

You can plant potato varieties that are resistant to Colorado beetles such as Russet Burbank. Planting varieties that mature early could also be helpful since damage by beetles only worsens as the season progresses and the eggs hatch. Yukon Gold, Norland, and Caribe potatoes are all early-maturing varieties planted for the early season.

You can place floating row covers on top of your plants and allow them to sit. This unique material lets in air and light but keeps away hungry potato beetles.

You can also mulch your potatoes heavily with straw to keep the tubers out of sunlight. Mulching will also help create a suitable habitation for ground beetles, green lacewings, and ladybugs, which feed on the Colorado potato beetles.

When your plants are relatively mature, allow your poultry to wander through the farm from time to time. They will pick off potato bugs and help keep them under control.

You can apply various methods to put potato beetles under control once they infest your plants. You will need to act fast and combat these annoying creatures immediately you spot them. Here are some of these methods;

1. Hand-pick the beetles, eggs, and larvae and place them in a bucket containing soapy water to kill them

2. Apply neem oil, which is an organic gardener’s go-to insecticide. This product works better than most conventional options

3. Use a special bug-vacuum to remove the eggs, larvae, and beetles. You can also use an ordinary handheld household vacuum to get rid of the creatures

Why You Find Potato Bugs In Your House

The presence of potato bugs in your house is an indication of an outdoor infestation. When the pests population increases, they may move inside your home to look for alternative shelter and food. If your yard has excessive debris and moisture, it could harbor pill bugs.

Heavy rainfall could also drive the pests inside during early summer and in the spring.

Potato bugs can be a menace to your plants if allowed to infest your gardens in large numbers. These crawling pests are named potato bugs due to their eating habits as they feed on the leaves, tubers, and even your plants’ roots.

If you don’t get rid of these creatures, they can destroy your potatoes and other crops such as peppers, eggplants, and tomatoes. You can prevent the pest by using chemical insecticides, baiting, trapping, or physically removing them from the plants.